Comments and presentations are rolling in to the FCC regarding its plan to use spectrum-sharing techniques to open up the 3.5 GHz band for wireless broadband use. The idea to create a Citizens Broadband Radio Service (CBRS) in this band is revolutionary in many aspects, but some are concerned that this uniqueness–particularly as it applies to the spectrum band plan–might have unintended ramifications in the United States as well as globally.

There is much to be decided before the 3.5 GHz CBRS is finally launched. Comments on the FCC’s proceeding are due July 14, with replies due Aug. 1.

Much of the focus of participants has been on the ground-breaking effort to use complicated spectrum-sharing techniques to free up the targeted spectrum. According to the FCC’s Further Notice of Proposed Rulemaking (FNPRM), released in April 2014, the commission intends to apply spectrum sharing to 3550-3650 MHz spectrum and is also pondering extending the service to 3700 MHz, providing a total of 150 MHz of spectrum for the CBRS.

The FCC’s three-tiered access and sharing model would be comprised of federal and non-federal incumbents, priority access licensees (PALs) and general authorized access (GAA) users. GGA users would basically be unlicensed users like Wi-Fi users today, while PALs, such as mobile operators, would likely use the spectrum for multiple applications, including mobile broadband and small cell operations. 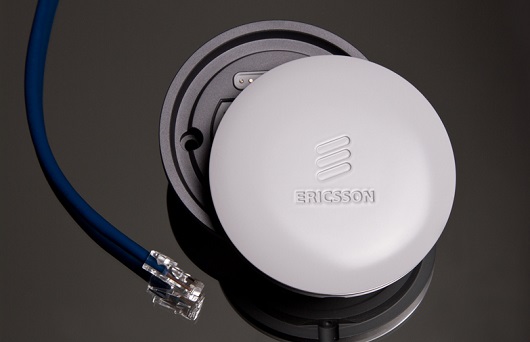 The Ericsson Dot is one of a number of small cells that could work in the 3.5 GHz band.

As with TV white space (TVWS) spectrum, which sits on vacant spectrum between digital broadcast channels, CBRS spectrum will be made available via the use of cognitive radio technology and some type of spectrum database, which the FCC refers to as a Spectrum Access System (SAS).

Despite enjoying support from the likes of Google (NASDAQ:GOOG), AT&T (NYSE:T) and Verizon (NYSE:VZ), the CBRS’ three-tier service design appears unlikely to catch on outside of North America. Jussi Kahtava, director of UK-based Allied Spectrum Associates, contends the inclusion of an unlicensed GAA tier makes the CBRS more complex than it needs to be.

Kahtava was formerly with Nokia (NYSE:NOK), which together with Qualcomm (NASDAQ:QCOM) promoted a licensing model called authorized shared access (ASA), which is akin to Europe’s version, licensed shared access (LSA). The companies have touted ASA/LSA as a way to free frequencies for wireless broadband when spectrum, such as that reserved for government services and other incumbents, cannot be cleared within a reasonable timeframe or at all locations. Currently conceived as a binary spectrum-sharing model, ASA/LSA approach does not include unlicensed spectrum for the general public to use.

In a May 2014 presentation to FCC staffers, Nokia representatives urged the commission to “keep it simple” by using a two-tier ASA/LSA approach. They said such capabilities are already included in currently available commercial products and systems that fully comply with 3GPP Release 8 standards. 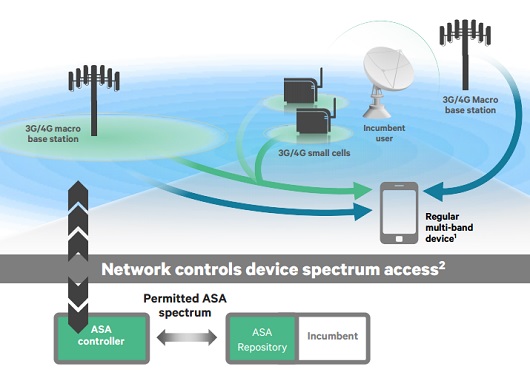 Qualcomm shows off the ASA model in one of its presentations.

If the FCC sticks with its three-tier model rather than pursuing a two-tier ASA/LSA scheme, that will not likely have much impact outside of North America. However, the spectrum band plan that the commission sets up for the CBRS could have some impacts on global spectrum harmonization efforts.

This presents a potential harmonization problem in that the FCC is defining the CBRS 3.5 GHz band as 3550-3650 MHz, with possibly 50 MHz more being added to take it to an upper limit of 3700 MHz.

“The frequency range defined in the FCC NPRM (Notice of Proposed Rulemaking) is not fully aligned with the current 3GPP band definition (Bands 42/43) which might be interpreted as a requirement for a new 3GPP frequency band,” said Dima Feldman, director of RF systems engineering at Altair Semiconductor, via email.

In an April 2013 filing regarding the FCC’s original NPRM for the 3.5 GHz band, trade group 4G Americas cautioned that a unique U.S. band plan “could delay availability of devices and infrastructure in our market.”

If the U.S. CBRS band was matched to European TD-LTE bands “you would get benefits of   scale,” and chipset vendors could easily serve both markets with a single chipset, Kahtava   said. When it comes to 3.5 GHz band planning, “to the extent possible, the FCC should   coordinate with the CEPT and European Commission in Europe,” he added.

It’s important to note that the 3.5 GHz band is already being used for commercial services in markets worldwide.

That is why First International Computer recently introduced a 3.5 GHz LTE-enabled tablet computer using Altair technology. The tablet is targeted at “markets where this spectrum is either already allocated for LTE–such as the UK, France and Italy in Europe, countries in Latin America and Africa where 3.5 GHz spectrum was previously used for delivering WiMAX services, or markets such as Japan where LTE in the 3.5 GHz band is expected to serve as a capacity overlay to existing cellular mobile networks,” Feldman said.

He expects commercial chipsets for devices will be able to cover any LTE services in the 3400-3800 MHz range regardless of how the FCC sets up its 3.5 GHz band plan.

“On a device level, it is possible to cover the entire 3.4-3.8 GHz spectrum with a standard FDD grade transceiver (RFIC transceiver that was designed for FDD and TDD operation) while meeting all the regional-specific requirements that can be signaled through the existing LTE network signaling mechanism similarly to U.S.-specific [network signaled value] NS_06/NS_07,” Feldman said.

However, yet another spectrum issue was recently cited by the WiMAX Forum, which is urging the FCC to eliminate the 3650-3700 MHz spectrum band from its CBRS regulatory plan, at least until spectrum-sharing techniques have been successfully proved out over a few years. The forum contends inclusion of that spectrum would pose a potential threat to U.S. 3.65 GHz band incumbents, including more than 100 utilities as well as oil and gas companies and hundreds of small wireless Internet service providers (WISPs).

The FCC is well aware of the global spectrum harmonization issues regarding its 3.5 GHz band plan as well as initiatives the commission is undertaking to open up the 5 GHz band for unlicensed use and 600 MHz broadcast spectrum for wireless broadband. In a June blog post, Commissioner Michael O’Rielly cited those bands as he called for the U.S. government to start preparing for the next World Radiocommunication Conference (WRC-15), scheduled for November 2015 in Geneva, Switzerland.

“The United States has already taken action to open these frequencies to commercial wireless service in this country, but consumers will benefit if we are successful at WRC-15 in reaching international agreement,” O’Rielly wrote.